I consider myself very fortunate to live in the Crossroads Arts District of downtown Kansas City, and one of the main reasons is beer. And lots of it. There are currently six craft breweries within walking distance, and one more in the works.

Some people will say that’s too many, that eventually the market will become saturated, and not all of them could possibly make it. But anyone who’s visited each one of them would probably argue that’s not likely to be the case. There’s a reason these brewers are opening up shop here in droves, and I think a major reason is the sense of community that’s fostered here. While there must be some sense of competition among them, it’s not readily evident. The breweries actually welcome newcomers (most recently, Casual Animal), promote each other on social media and even collaborate with each other on beers. Each has a strong individual personality and brand identity and together, they’ve developed a unique and friendly atmosphere that’s contributed greatly to the vibrant night life of the Crossroads.

Without further ado, allow me to introduce you to the lineup (in alphabetical order):

Border, which has become a Crossroads brewery stable, hosted their 3rd anniversary party just a little over a month ago. While they may have the smallest amount of physical space inside their taproom, they more than compensated for it with the addition of a massive, beautifully built attached patio deck complete with a TV and regular bags tournaments. Their taproom has a few regulars as well as some rotating taps, which always includes one beer chosen by you. As part of their ‘We brew for you’ slogan, they regularly host votes for what beer people would like to see on tap next. The taproom and patio are dog friendly and allow outside food, or you can munch on a small bowl of whatever complimentary bar snack they have on hand (typically some type of salty chex mix).

Try: Either of their Blondes (Backyard and Strawberry) or the Shiftie IPA – Full Tap Menu

Brewery Emperial wins hands down for best outdoor drinking space in the Crossroads. Attached to their unique, rounded tin building is an patio space complete with picnic tables, fire pits, brightly colored umbrellas and often during warmer months, live music. While I haven’t had the pleasure of dining here yet, I have heard nothing short of excellent things about the food, which offers a robust and relatively upscale menu for a brewery. Their outdoor space is dog friendly, and they are the only Crossroads brewery that also offers a full bar, along with their own cocktail menu.

Casual Animal is the newest member of the Crossroads brewery family, opening in the beginning of February. They came out strong, though, with a well-designed space and a full lineup of “laid back beers that tap into your wild side.” They are home to a shuffleboard table (and now tournaments), baskets full of complimentary peanuts to crack as well as other small snacks that are available for sale, and a garage door front that opens onto a small attached patio space which is, you guessed it, dog friendly! They currently have a limited release Peanut Butter Stout on tap I’m dying to try…

Try: Experimental ESB or the Hoptify IPA (all of their beers have run animal-related names and logos!)

Next door neighbors with Border Brewing, Double Shift is another local favorite that’s been around for about three years now. One of the larger taprooms in the Crossroads, they recently replaced their picnic tables with more ample seating. They also have a variety of board games to keep you and your friends entertained, and large garage doors that open up when the weather is nice. This is another bring your own food establishment, which works out well with Grinder’s and Mission Taco directly across the street. Double Shift also hosts Vinyl Thursdays, where you can bring in your favorite record for them to spin while you sip, as well as trivia on Sunday evenings. They recently started distributing in Missouri, so look for them on tap at your other favorite KC bars!

Try: The Sister Abbey is a pretty good regular, but right now I’m digging their Smoke Ritual and Trampled Rose (their sours are all reliably delicious). Also, their Turk Kahvesi (their take on a coffee stout) is a must-get when available. – Full Tap List

iTap, which is short for International Tap House, took over the large space on the corner of 18th and Oak last summer. Situated between Border, Double Shift and Brewery Emperial, iTap boasts an entire book of beers ranging from locals from Kansas City, Missouri and Kansas, as well as an impressive worldwide variety. They have solid specials during the week like half off half the taps on Mondays and discounts for passport holders on Wednesdays. If you like beer and see yourself spending a lot of time here, get the passport. It lists all the beers they have, with prizes at different levels encouraging you to drink your way around the world. You get an iTap beer glass when you sign up (it costs money, I don’t remember how much but it’s worth it), and it never expires! Their patio is dog friendly (did you guys know I have a dog??) and you can bring your own food here, too. They’ve made it super convenient by being connected on the inside to Mission Taco. Just walk straight through the hall by the restrooms and you’ll run right into their to-go counter. Place your order, they’ll give you a number and bring your food over when it’s ready.

Try: Something from another local Kansas City brewery outside of the Crossroads, like KC Bier Co., Cinder Block Brewery, Stockyards Brewing Co. or Martin City Brewing Company, just to name a few. 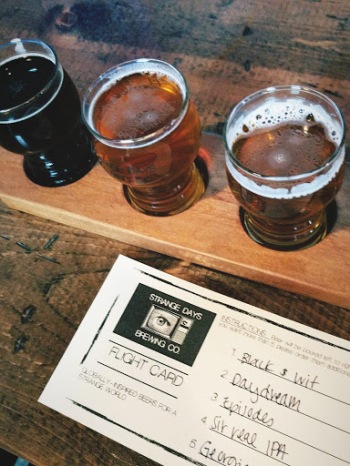 Ok, so Strange Days isn’t actually in the Crossroads, but it is the newest brewery to open up downtown and I really liked ’em, so I decided they deserved a shout out, too. Because after all, they are only a Streetcar ride away, so you could totally make them part of your downtown beer tour by foot. And should. At Strange Days, they do as their name suggests and embrace the strange, brewing unique beers with a global focus. Beyond what’s on tap, they also can some of their beers, so you can grab some to go. If you’re a fan of European soccer, grab a seat and never leave. They show as many of the games as they can and even open up at 6:30 in the morning for fans to come watch the games (and serve beer of course)! Some snacks are available for purchase, but as is the trend, you can also bring your own food. I recommend something delicious from the River Market, maybe some globally inspired fare to go with your globally inspired beer.

Try: The Sir Real IPA (sorry, apparently I have a thing for IPAs). I’ve only been here once and got the flight, and I enjoyed every beer on it. Since my visit, they’ve tapped a Hazy Mango that sounds like it’s sure to be a deliciously refreshing summer beer. – Full Tap List

The veteran of the Crossroads brewery movement (founded in 2014), Torn Label is a well-established and well-loved brewery situated on the edge of the East Crossroads. It’s also currently the only one of the pack canning its beer for distribution in and around the KC area. They have a cool space that is slightly hidden through a gate and up some stairs (just enter the gate under the bottle). The taproom is cozy and the adjoining patio is covered and spacious (annnnnd… dog friendly!). They allow outside food and often feature food trucks in the gravel lot at the bottom of the stairs. One crowd favorite is Cheesy Street, slinging gourmet grilled cheeses that pair perfectly with Torn Label’s lineup of beers.

If you haven’t checked out the Crossroads beer scene recently, it’s worth making the trip for another visit!